Why We Should KILL the Idea of “Die-Ins”

I told myself that I would not participate in them—especially after I learned what they were called. But I ran into one accidentally the other day. Had I known what was about to happen, I would have never stayed around to witness it, for I was not prepared. Someone was speaking to a group of young protesters when suddenly, a young man walked in the middle of the circle and fell to the ground as if dead. Then faster than a domino effect, each person in the circle fell to the ground to mock dead too. I assume they laid there for a designated amount of time while others who weren’t participating walked the other way or perhaps watched the demonstration until they hopped up to do some chanting and angry talking. I can only imagine because once I saw what was happening I walked away as quickly as I could.

I wonder how the participants felt after this demonstration. Did they feel a sense of accomplishment based on the number of people who participated? Based on the number of people who watched? I wonder whether or not they thought their actions prevented a police officer from shooting another innocent human being. Did their actions stop a future grand jury from not indicting a corrupt officer who will murder a black child in cold blood? Or were they just parroting what other people around the world were doing just to say they did something–claiming to spread awareness about the issue of police brutality and the systemic devaluing of Black life in America?

The whole notion to me is silly.

2. Play dead for a few minutes.

3. Get off the ground when ready

Beyond silly, the notion of a die-in is dangerous. As someone who believes in the power of suggestion, visualization, and other aspects of the law of attraction, playing dead is the first step to dying. It’s the same, if not worse, than rolling around in a wheel chair or playing cripple with someone’s crutches. We are encouraged not to do such things because going through the motions of walking with crutches or rolling in a wheelchair will attract a circumstance to your experience that will require you to need crutches or a wheelchair—in the same way carrying a fertility doll is believed to help a woman become pregnant. The reason why we need to kill the idea of the die-in is because the only thing it is attracting is people dying en mass.

What kind of energy is spreading with these demonstrations around the nation? What are we inadvertently creating?

…Okay, so I didn’t want to write a note about this. In fact, my goal was just to stay out of it altogether. But then I started reading more and more stupid comments from people about this issue, and felt the need to make my opinion on the subject heard. 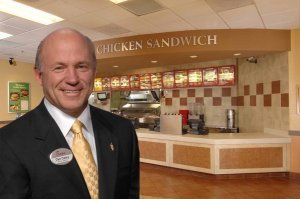 There’s been a recent bru-ha-ha about comments the President of Chick-fil-a made during an interview with the Biblical Recorder in North Carolina (later reprinted by the Baptist Press). Prior to reading the actual comments made, the only thing I heard that could be gathered from it was that Dan Cathy and the Chick-fil-a company were against gay marriage. Frankly, I wasn’t surprised at this – Chick-fil-a’s been a company running on Christian values since it opened. What, you think their “closed on Sunday’s” policy is just to give the chicken an extra day to marinate?

What I couldn’t understand was why someone would come out and blatantly state this, knowing full well that gay people may actually go to their restaurants.  So, rather than listen to what everyone else was saying, I decided to find the actual article that started this whole thing.

And, as it turns out, my suspicions were correct: that’s NOT exactly what was said.

For those of you who don’t care to hear second-hand info, here’s a snippet from the article as it was written (click here to read the entire article):

Some have opposed the company’s support of the traditional family. “Well, guilty as charged,” said Cathy when asked about the company’s position.

“We operate as a family business … our restaurants are typically led by families; some are single. We want to do anything we possibly can to strengthen families. We are very much committed to that,” Cathy emphasized.

“We intend to stay the course,” he said. “We know that it might not be popular with everyone, but thank the Lord, we live in a country where we can share our values and operate on biblical principles.”

Let’s get a few things out the way here: first of all, nowhere in the ENTIRE ARTICLE do the words “gay,” “lesbian,” “transgender,” or “bisexual” appear. So, anyone who’s been saying that Mr. Cathy stated he was against gay marriage has been misquoting him.

Mr. Cathy’s statement was made when he was being interviewed by the Biblical Recorder, which one can assume is a CHRISTIAN organization. The website that posted the article, the Baptist Press, is also a CHRISTIAN organization who’s motto is “News With a Christian Perspective.” The Christian view of gay marriage is that it’s wrong. Therefore, companies built by Christians are going to have the same viewpoint.

Furthermore, nowhere in his answer did he say he hated or had any animosity towards the gay community. In fact, he didn’t even go into discussion about his company’s position on marriage – one that’s been well-known for YEARS – until he was asked about it. And even then, it wasn’t as if whatever answer he gave was going to be that shocking. Can all of you who are now suddenly against Chick-fil-a seriously tell me, based upon how they’ve operated all these years, that you’re really, REALLY all that shocked that Chick-fil-a would support what they consider to be the biblical definition of a “family unit?” 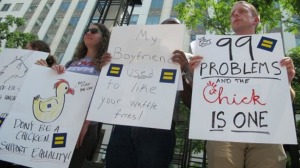 They assume Mr. Cathy’s comment is just about their community. It’s not. Look at the way it’s worded: “traditional family.” Their stance is not about NOT supporting gay marriage (though I’m sure it’s not exactly something they’re looking to throw money at to support either). It’s about supporting the things and values they feel make for the healthiest family environment.

Their statement, if delved into more deeply, means they’re also against the following:

*Kids growing up in single-parented households

*Parents wanting to get divorced

*Families that constantly abuse themselves, each other, or others

It would be against the mission statement of the company – not to mention their image – if they decided to say “screw it” and show support for any and everything that goes against the nature of what their actual values are. If they are claiming to be a company based upon Christian values, supporting certain things – like the list above, as well as gay marriage – would be more harmful to them in the long run.

This is not to say these types of elements are not allowed to enter their restaurants. However, if their vision of what a “healthy family unit” is consists of households with a mom, a dad, a few kids and some grandparents, they have the right to support that vision.  They’re not discriminating against other types of families who come into their restaurant, but at the same time they shouldn’t have to feel the need to bend and/or change their views of what they feel a healthy family unit is just to make one group of people happy. In fact, if they DID do that now, it would be worse.

Before I finish this article up, I feel I should add something: I know someone is going to read this and want to comment with the response: “But Aaron, you’re Black! You should empathize with how gays would feel about this issue! How would you feel if they said they only support the idea of White marriages?”

First off, please stop comparing the gay struggle to the civil rights struggle. It’s not the same thing: Blacks were taken from their homeland, sold into slavery, separated from their loved ones, whipped, demoralized, pit against each other, and had to fight to get even an ounce of freedom and recognition as citizens. Tommy having to “struggle” about whether to tell his friends he likes boys is NOT a comparable situation.

More importantly: a company’s opinion about what they view a true marriage to be doesn’t concern me. What concerns me is how they treat me when I go into their establishment. Reality check: many, MANY businesses in this country were started and/or still ran by people who have views on things that are against my viewpoint. If I stopped supporting each one who had an “opinion” different from mine, I’d be walking around butt naked with no electronic devices or apartment to speak of.

statement about his company’s views on marriage stop you from eating there. You were eating there the day before you heard about him making the statement, but the company’s opinion has been public knowledge for YEARS. Suck it up, get your eat on, and make sure you order their lemonade when you do.

Aaron P. Taylor is a graduate of Hampton University. He currently resides in Los Angeles, CA, where he works as a film editor, creative consultant and writer. You can read more of his articles at www.1001ThingsToBeThankfulFor.com