Why I Will Not Wear a Hoodie

I thought there was momentum.

I thought people were angry enough to do something.

I thought the world would finally see the younger generation in action.

Instead of meaningful, power-shifting action, we got a bunch of silly instructions on how to “honor” Trayvon’s life, or express discontentment for Zimmerman freedom.

I will not buy skittles and send a letter because I will not make Skittles® rich trying to make a statement that no one will hear. 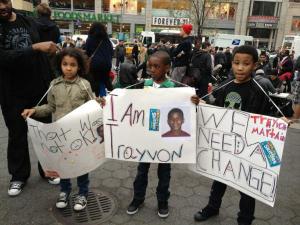 I will not wear a hoodie because wearing a hoodie will not put an end to ideas and systems fueled by white supremacy that gave birth to the racism that killed Trayvon and a countless number of others!

I will not wear a hoodie because it shouldn’t take a million people wearing hoodies for Black people to get justice!

I am becoming annoyed.

I wonder if people really think that displaying unity by wearing a hoodie will get to the root cause of Trayvon’s death.

I wonder if people really think that Obama’s acknowledgment that his son would look like Trayvon will not ensure that such a flagrant disregard of justice will not happen again.

Why is it that our people are limited to such ineffective means of protesting? Whatever happened to the notion of never forgive, never forget, never again? Why not create a strategy that will empower those in society who are unprotected by the same laws that protect racist murderers?

This entry was posted on March 23, 2012 by Tim Lee. It was filed under Uncategorized .